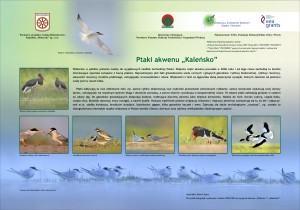 What happened in Kaleńsko after the installment of platforms and ground work had been finished? Here is a quick summary J

Generally, what happened there was a very pleasant surprise for all of us!
As of today I can say that:
–  after 9 years of failures,  Eurasian oystercatcher Haematopus ostralegus has finally managed to have a successful clutch. There is a photograph of the hatchling in the attachments, we also have a video that shows how its parents teach it to hunt. I am very glad that I could show this phenomenon to kids. It hatched on the island and (as Eurasian oystercatcher is a precocial) left it, later we saw its parent leading him along the shoreline.
– for the first time in 9 years little tern Sternula albifrons has had its first successful clutch (just like the oystercatcher, they were losing the clutch when it was still an egg). It is very important, as the species is extremely rare in Poland and the number of them is decreasing. We had a minimal amount of 8 nests (probably 9) with a full clutch of 3 eggs in each nest. Three birds hatched from every one of those 8 nests and all of them lived as long as to able to learn to fly. They are now beautifully hunting around the Odra river, and in their homeland in the reservoir (interesting fact – they were flying in a triangular sibling formation)
– Common tern Sterna hirundo. Until now, the highest observed amount was 12 pairs (which is a crazy big number in western Poland), usually the number was lower, not higher than 8 – 10 pairs, they also had only one partially-successful clutch in 2008. This year, I couldn’t believe my eyes when I saw at least 50 nests (there were around of 100 adult specimen around the area!). They all had successful clutches (some could have had more than one). Around 15th of July, a falcon attacked and more than 200 birds flew up simultaneously.
– It is worth to mention at least 5 nests with fully successful clutches of little ringed plover Charadrius dubius (there were 6, but one was lost in the recent days, in addition it was the only nest located on land, and the mother did not care much for it. It was also clutched a little late. The clutch was destroyed at the end of July by some predator). After a successful hatch, at least two pairs proceeded to have another hatch.

To sum up, even after taking into account the annual losses of some clutches (of very valuable species) it was a real explosion in the population.